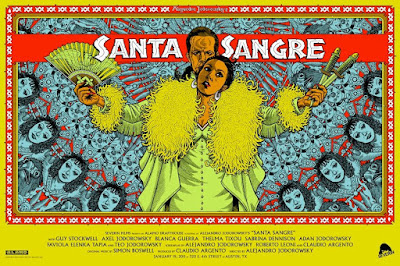 being a huge jodorowsky fan i was stoked when i got the news that this movie is being released on blu ray by severin films.in case you haven`t seen it yet i strongly suggest you check it out.
there are few movie makers that make anything so utterly insane and creative as jodorowsky did.santa sangre has been compared to hitchcock´s psycho by critics but the visuals are completely different and unique.if freud was alive he would have loved santa sangre for its rich symbolism and psychological allegories.

anyway,here is the press release info on my new print:

"The good folks at Mondo commissioned an outstanding piece of art by Florian Bertmer, (who also created this stellar Mondo poster of The Holy Mountain), for the one night only screening of Santa Sangre at the Alamo Drafthouse in Austin TX tonight. Mondo’s posters are printed in very limited numbered runs and are usually gone within minutes of going on sale. The Santa Sangre poster will be super limited run of 200. And will be available tonight at the screening at the Alamo Downtown and then tomorrow on Mondo’s website. With thanks to Mondo’s Justin Ishmael for this exclusive look."

Details of tonight’s Austin, TX show, and the subsequent screenings in Boston and New York are as follows: