All Pigs Must Die - God is War artwork 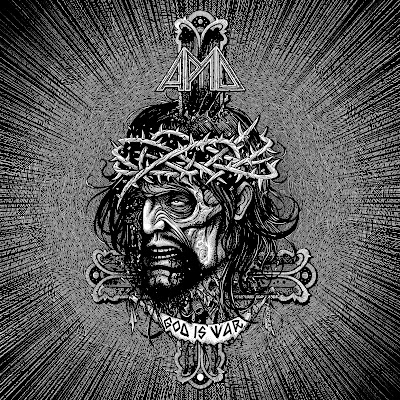 here`s the artwork for All Pigs Must Die`s upcoming Lp on Southern Lord which is called "god is war".personally i think it is even better than their debut Ep so i am totally stoked for this.the record itself is heavily inspired by the book "blood meridian" by Cormac McCarthy and the title itself is taken from a monologue by a character called the judge:

"Suppose two men at cards with nothing to wager save their lives.
Who has not heard such a tale?
A turn of the card.
The whole universe for such a player has labored clanking to this moment which will tell if he is to die at that man's hand or that man at his.
What more certain validation of a man's worth could there be?
This enhancement of the game to its ultimate state admits no argument concerning the notion of fate.
The selection of one man over another is a preference absolute and irrevocable and it is a dull man indeed who could reckon so profound a decision without agency or significance either one.
In such games as have for their stake the annihilation of the defeated the decisions are quite clear.
This man holding this particular arrangement of cards in his hand is thereby removed from existence.
This is the nature of war, whose stake is at once the game and the authority and the justification.
Seen so, war is the truest form of divination.
It is the testing of one's will and the will of another within that larger will which because it binds them is therefore forced to select.
War is the ultimate game because war is at least a forcing of the unity of existence.
War is god."