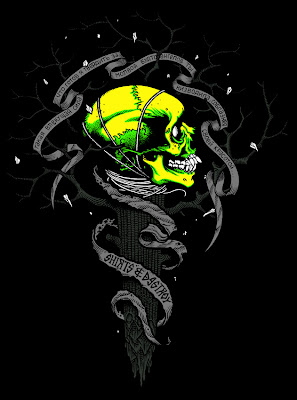 
for anyone who cares here`s some info on my baba yaga shirt for shirts and destroy.
i`ve always had an interest in folklore especially the really old and dark ones because they were meant to scare you or teach you a lesson.the russians in particular have some really fascinating and grim ones to tell and i`ve always wanted to do a drawing for one of these stories.
According to russian/slavic folklore there was once an old witch who flew around on a giant mortar,abducted and probably ate small children, and lived in a hut that stands on chicken legs.the fence outside is made with human bones with skulls on top.in one story the heroine Vasilisa the Beautiful took one these skulls and used it as a lantern.
The text in the banner was taken from a poem by the famous russian poet A.A.Blok titled "To the Muse" and the text goes: